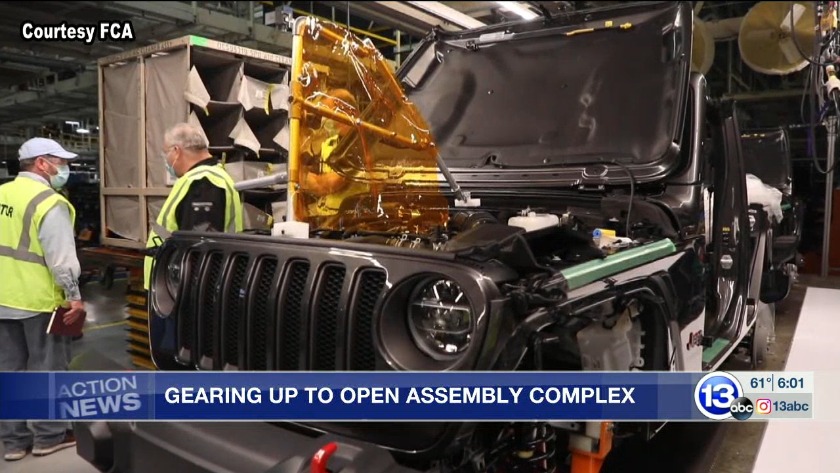 TOLEDO (WTVG) - Employees will be back to work at the Toledo Assembly Complex next week after production has been idle for eight weeks. During that time away, the facility has gone through a deep cleaning, from floor to ceiling.

UAW Local 12 president Bruce Baumhower said new filters have been put in the entire ventilation system and up to 40 percent more fresh air can be circulated from the roof.

He added that FCA has resurfaced all the floors and painted all the walls. The restrooms have been cleaned and reconfigured, and they'll be cleaned four times a day.

Break benches have been reduced from six to three seats, with plexiglass between everyone. Spacing between workers will also be changed on the lines.

About 50 skilled trades members worked voluntarily during the shut down. Baumhower said what they came up with to help keep workers safe moving forward is impressive. According to Baumhower, FCA will be using some of the ideas that came from Toledo workers at its other plants.

Baumhower said FCA has also taken the position that if a member has an idea to help that had not been thought of, it can be implemented.

Stephanie White is a Jeep worker who is confident the right steps have been taken to help keep people safe.

"This will be a bit of a trial Monday, I am sure. Whatever issues may come up, I am sure they will take care of and address. I am hoping everything will go well. I am excited and ready to get back to work," said White.

In addition to all the changes on the floor, workers will be given two face masks a day. They'll also have their temperatures taken every day. Baumhower says the best practices from the plant will be shared with suppliers, too.

FCA also has two other plants in our region -- Toledo Machining in Perrysburg Township and an engine plant in Dundee.

It's not just FCA that's re-starting its plants. Production is also expected to resume at most Ford and GM plants on Monday.

AAA encourages parents, teen drivers to watch out for risky behaviors behind the wheel

AAA encourages parents, teen drivers to watch out for risky behaviors behind the wheel