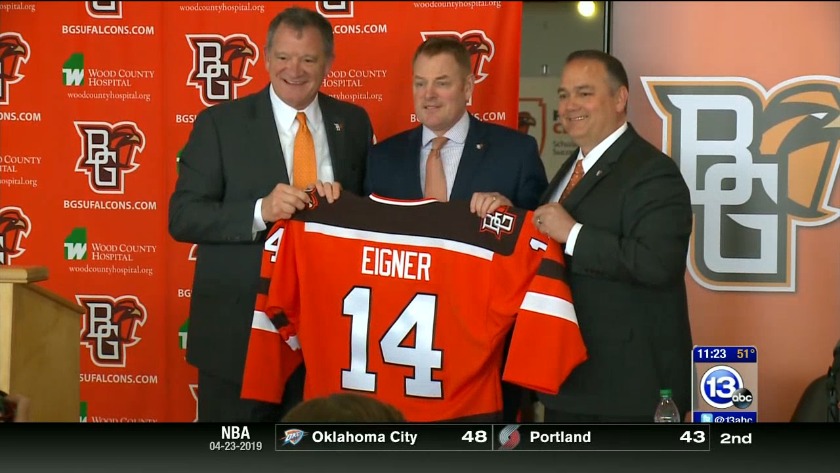 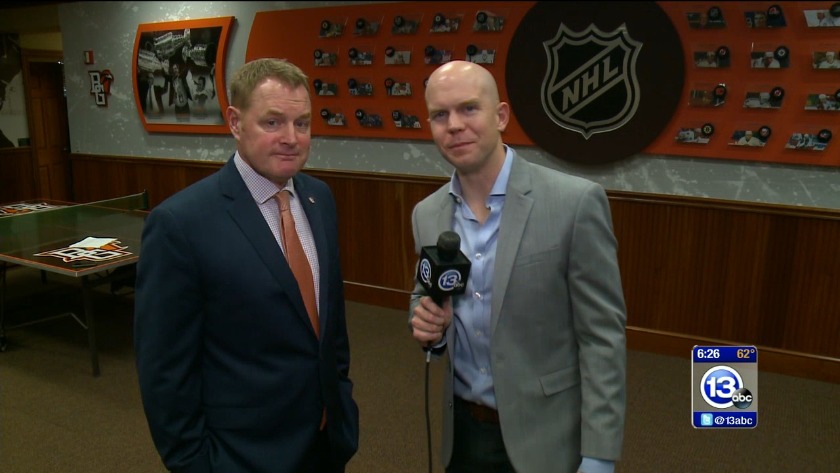 BOWLING GREEN - Bowling Green State University Director of Athletics Bob Moosbrugger has announced alumnus Ty Eigner as the eighth Head Coach of the Bowling Green Falcon hockey program. A 1993 graduate of BGSU who has spent the last nine years as an assistant coach for the Falcons, Eigner has accumulated almost 25 years of coaching and administrative experience, playing three years at the professional level.

"I am incredibly humbled and very proud that President Rodney Rogers, Bob Moosbrugger and Jim Elsasser have the confidence in me to be the next head coach of the hockey program," Eigner said. "I was fortunate to play for the winningest coach in college hockey history, Jerry York, and now I get the chance to lead this program. Bowling Green has an incredible hockey history. I am confident that with the continued hard work of our student-athletes and a coaching staff dedicated to teaching and development, we will take the next steps toward being a championship program."

"We are thrilled to announce Ty Eigner as the next head hockey coach at Bowling Green State University," Moosbrugger said. "Ty has earned this opportunity to lead our hockey program. His passion for BGSU, the hockey program and the BG community is clear and abundant. His vision for taking the program forward is inspiring. We consistently heard about his recruiting, his work ethic, his teaching ability and the strong connections throughout hockey, Bowling Green and the BGSU community. We look forward to many years of continued excellence in the hockey program under Ty's leadership."

In Eigner's nine-year tenure as an assistant coach, the Falcon Hockey program has risen back to national prominence, posting an overall record of 171-154-44. This includes winning seasons in each of the past six years and a current stretch of five straight 20+ win campaigns. The Falcons have finished in the top three of the WCHA regular season standings five times and have advanced to the WCHA Tournament Championship game twice in the past three years. In 2018-19, the program tallied the most wins since the 1995-96 season by going 25-11-6. This earned Bowling Green an appearance in the NCAA Tournament for the first time since Eigner was a player in 1990.

"BGSU hockey is an important asset to our community," President Rodney Rogers said. "Coming off of our first NCAA Tournament appearance since 1990, it is important to continue the positive momentum. Ty Eigner has been instrumental in the rise of our program and has earned his appointment to Head Coach. We look forward to continued success on the ice, in the community and in the classroom."

With his experience as a defenseman from his playing days, Eigner has helped guide nine freshmen classes, aiding heavily in the development of the defensive corps. BGSU has continued to rely heavily on Eigner's strengths, as BGSU led the country in team defense in 2018-19 with a 1.78 goals against average. That 1.78 GAA is a stark contrast from the from the 3.77 goals against average in the year prior to his arrival. In his first year, the Falcons improved by almost a goal allowed per game, to 2.94. Since that time, the program has allowed less than 3.00 goals per game in all nine of his seasons, and has improved to fewer than 2.50 goals against average in each of the past five seasons.

Under Eigner's tutelage, defensemen Mark Friedman, a third-round draft pick of the Philadelphia Flyers, and Nolan Valleau were both named to the WCHA All-Rookie Team in 2014-15. Friedman was the WCHA co-Rookie of the Year and went on to All-WCHA Second Team honors in 2016-17 prior to signing a professional contract. Alec Rauhauser also earned the accolade for his success in the 2016-17 campaign and then took another step forward in 2017-18, being named AHCA/CCM Hockey Men's Division I Second Team All-American and the WCHA Defenseman of the Year.

Friedman has since made his NHL debut with the Flyers, while former Falcon blueliner Sean Walker has debuted with the LA Kings. Walker played in 39 games with the Kings in 2018-19, scoring 10 points.

Prior to his return to the Orange and Brown, Eigner completed a two-year stint as an associate coach for the boy's hockey program at Eden Prairie High School in Minnesota. While there, Eigner helped lead the Eagles to the Minnesota AA state championship, and was named State AA Assistant Coach of the Year in 2009. Thirty young men coached by Eigner went on to play collegiate or junior hockey.

The Minnesota Hockey Coaches also honored Eigner with the Dave Peterson Award in his final season (2007-08) with the Warriors. From 1999 to 2008, Eigner served as a full-time instructor for Minnesota Hockey Camps, as well as the Hockey Director for the Brainerd Amateur Hockey Association. He also coached and evaluated within USA Hockey 15 & 17 National camps, a position held since 2005.

Eigner served as Bowling Green's captain for the 1992-93 season, and was a member of the program's last two NCAA tournament teams prior to the 2018-19 season. Eigner's playing career at Bowling Green spanned 123 games, where he had a line of four goals, nine assists and 13 points. He played under Falcon coaching legend Jerry York, and as captain in 1992-1993, led the team to an 11-game turnaround, as well as a five-game improvement in CCHA play from the year before.

Eigner and his wife, Erika, reside in Bowling Green with their three children -- Peter, Ellie and Kate.