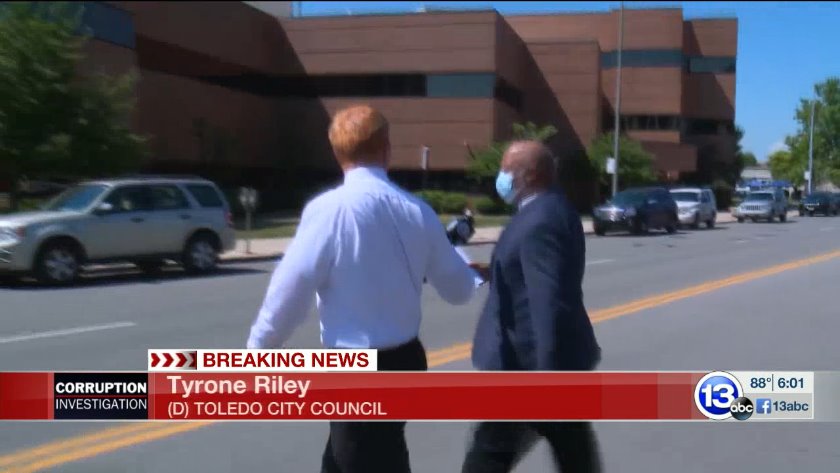 TOLEDO (WTVG) - Four members of the Toledo City Council have been accused of accepting bribes while in office, according to court documents obtained by 13abc on Tuesday.

According to a criminal complaint filed with the U.S. District Court, Councilman Sykes faces complaints of "Reciept of Bribe by Agent of Organization Receiving Federal Funds" and "Hobbs Act Extortion Under Color of Official Right." In the affidavit filed along with the complaint, council members Harper, Riley, and Jonson are also named as subjects.

According to the affidavit, in early 2018, the FBI began an investigation into members of Toledo City Council, suspecting members of accepting or soliciting bribes in exchange for votes.

The alleged pay for votes scheme then unraveled over the next two years and according to the feds involved Yvonne Harper, Larry Sykes, and Gary Johnson.

The court documents detail how each of the council members allegedly accepted payments in the range of five hundred to five thousand dollars for 'yes' votes on zoning requests to internet cafes.

Additionally, Councilwoman Harper is accused of using a local attorney, Keith Mitchell, to solicit and accept bribe payments on her behalf.

Council members are not banned from engaging in city business, but are prohibited from private communications with those involved in this case.

If convicted the council members could face 10 years for bribery and 20 years for extortion along with 250-thousand dollars in fines.

"These allegations reveal greed, sure and simple. They also reveal a violation of public trust."

In a statement released on Tuesday, Toledo mayor Wade Kapszukiewicz said he was "shocked and heartbroken" by the arrests, calling it a "terrible day for Toledo — and for everyone who believes in the good that can be accomplished through public service"

He went on to say he, "was inspired to run for public office by a Catholic priest, Fr. Timothy O’Brien, who impressed upon me the benefits of a life dedicated to serving the public good. Because of his mentorship, I have no tolerance for public officials who abuse the trust of the citizens. One of the reasons Toledo has seen relatively little political corruption, historically, is because the public doesn’t tolerate it either.

"These members of Council are entitled to their day in court, and they should be presumed innocent until proven otherwise. I encourage all Toledoans to say a prayer for our city and for the hope that justice will be done in this case."

Mark Wagoner, Chair of the Lucas County Republican Party, also released a statement calling for the resignation of all four members of council, saying, "A culture of corruption exists within Toledo City Government. Four Democrat city council members – including the Executive Director of the Lucas County Democratic Party – have been arrested by the FBI in connection with a bribery scheme in Toledo city government. Democrat domination of Toledo city politics has consequences, and today we see them. Lucas County Republicans have long pointed to the culture of corruption within the City of Toledo and have put forward quality candidates to end Democrat domination. Today, the importance of watchdogs on Toledo City Council is never more clear. The Lucas County Republicans call for the following immediately: (1) all four city council candidates should resign; (2) open elections should be held for each of these open seats; and (3) Yvonne Harper should be removed as Executive Director of the Lucas County Democratic Party."