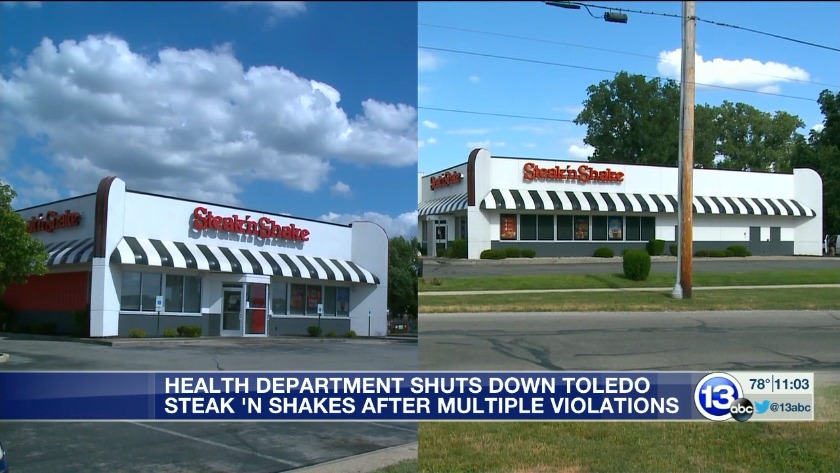 TOLEDO, Ohio (WTVG) - Both of the two Toledo Steak 'N Shake locations that were shut down by the Health Department have now reopened.

Health department leaders say they gave both locations plenty of chances to clean up their act.

"It got to the point where I couldn't keep sending my inspectors out every other day to keep an eye on it," environmental health director Dave Welch said.

Both restaurants were ordered closed Tuesday, and their food service licenses were suspended, after months of failed health inspections.

"As I was going in there were people still eating, and I thought they were playing," customer Isaiah Tippit said.

Tippit, a local barber, tried grabbing lunch at the Reynolds location as inspectors shut it down.

"I asked the lady, I said, 'You're joking. You're playing around,' and she's like, 'No. We're serious. We're closing,' and she put the sign up," Tippit said.

Inspections dating back to March show dozens of critical violations for overall cleanliness at both spots.

"Anywhere, [any] surface, where food ... touched—those were not being kept clean," Welch said.

Inspectors also found that some foods, like meats and veggies, weren't being held at proper temperatures.

"There were some issues with the walk-in [cooler] doors ... [they] could not keep temperature," Welch said.

"They should have been testing the dishwasher to say, 'Oh. It's lower than the parts-per-billion for chlorine that it should be,' but we were finding it," Welch said.

Reports also show customers' concerns over dirty floors, overflowing trash and even a leaky kitchen roof. It's also documented that many people got sick hours after eating at the locations.

"It is very serious," Welch said. "I mean, we don't take this lightly."

Health department leaders say clean-up is underway at both locations, and they could open up by the weekend if they fully pass inspection.

The Lucas County Health Department says it will re-inspect the restaurants on Monday.