Down to the quarterfinals at U.S. Junior Amateur 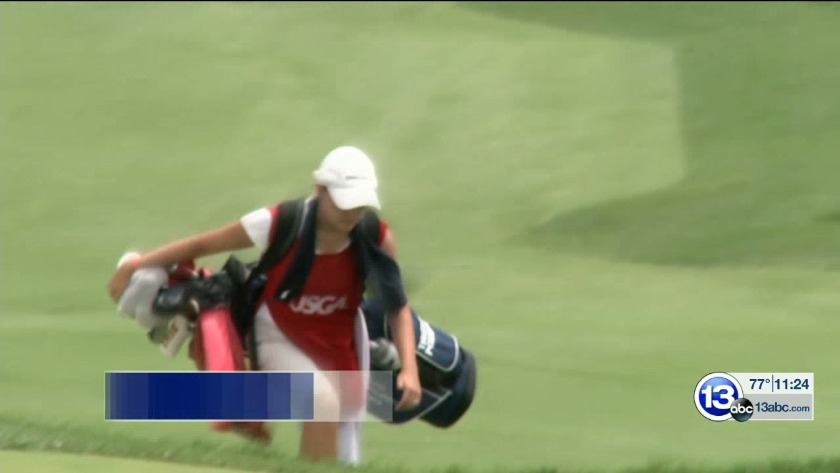 What Happened
Preston Summerhays, 16, of Scottsdale, Ariz., held off Akshay Bhatia, 17, of Wake Forest, N.C., the 2018 runner-up, 1 up, to gain a spot in the quarterfinal round of the 72nd U.S. Junior Amateur Championship on Thursday at Inverness Club in Toledo, Ohio.
Bhatia, who at No. 4 is by far the highest-ranked player in the Junior Amateur field in the World Amateur Golf Ranking (WAGR), had twice battled back from deficits to square the match with Summerhays, the final time with a winning par on the 490-yard, par-4 17th hole. But Bhatia sailed his approach shot over the green on the 367-yard 18th and failed to get up and down for par. No. 11 seed Summerhays coaxed his 7-foot birdie putt to within tap-in range for a conceded par and his second win of the day.
“I knew it was going to be a tough match against Preston,” said Bhatia, the No. 6 seed, who lost to Michael Thorbjornsen, 1 up, last July at Baltusrol Golf Club in the final. “The adrenaline got to me [on the approach shot on No. 18]. Just overshot the green, and the rough is penalizing. Preston hit a great shot, and I would have expected him to make the putt if he needed to.”
Last year’s champion Thorbjornsen, of Wellesley, Mass., was ousted on Thursday morning by Palmer Jackson, of Murrysville, Pa. Jackson, the No. 28 seed, led the defending champion, 2 up, through 11 holes, but Thorbjornsen rallied to tie the match with a birdie on the 460-yard, par-4 16th hole. Jackson regained the lead with a par on No. 17 and clinched the win by chipping in from the back edge of the green for a birdie on No. 18. The loss by No. 5-seeded Thorbjornsen, who made the cut in the U.S. Open last month at Pebble Beach, completed the ouster of seeds 1 through 5 in the match-play bracket in Wednesday morning’s Round of 32.
No. 8 Bo Jin, 17, of the People’s Republic of China, is the highest remaining seed after he defeated Jack Wall, of Brielle, N.J., 3 and 2, in the morning, and Brian Ma, of Milpitas, Calif., 2 up, in the afternoon. Jin’s older brother, Cheng Jin, reached the Round of 64 and Round of 32 in two starts in this championship.
No. 23 seed Joseph Pagdin of England ousted Ohio native Maxwell Moldovan, 4 and 3, in the afternoon after completing a dramatic rally in the morning. Pagdin, 17, who is No. 41 in the WAGR, highest of the quarterfinalists, was 3 down to Yuki Moriyama of Japan through 13 holes, but won four holes, three of them with birdies, to escape in 19 holes. The key was a curling 30-foot putt on No. 18 that forced extra holes.
Moldovan’s defeat left Austin Greaser, the No. 19 seed, as the last player standing from the championship’s home state. Greaser, 18, hails from Vandalia, a suburb of Dayton. He got to the quarterfinals with victories over No. 51 seed Thomas Ponder (1 up) and No. 30 Kento Yamawaki (5 and 3).
“It's really cool to have this tournament in Ohio, only about two hours from my house,” said Greaser, who will attend the University of North Carolina in the fall. “I’ve had people on the range say, let’s go Austin, let’s go, Greaser. They want to see an Ohio boy go far. It’s really exciting.”
No. 16 seed Devin Ramachandran, of San Rafael, Calif., outlasted the 2017 Asia-Pacific Amateur champion, Yuxin Lin, of the People’s Republic of China, 1 up, in a seesaw Round-of-32 match that featured five lead changes. Ramachandran, who just completed his freshman year at Seton Hall University, went on to eliminate Jacob Sosa, of Austin, Texas, 3 and 2 in the afternoon.
Notable
• Thursday morning’s Round of 32 produced a slew of upsets, based on the match-play seeding. The top five seeds were all ousted, after the top 16 seeds went 13-3 in Wednesday’s Round of 64 (Nos. 7, 10 and 14 were eliminated). The mass exodus evoked the Round of 32 in the 2010 U.S. Junior Amateur, when the following top junior players of the day were sent home from Egypt Valley Country Club in Ada, Mich.: medalist Curtis Thompson (brother of Lexi); Jordan Spieth, Bryson DeChambeau, Ollie Schniederjans, Emiliano Grillo, Lee McCoy and Cameron Wilson. Jim Liu went on to win in 2010, defeating Justin Thomas in the final.
• Preston Summerhays, who won his second consecutive Utah Amateur title last week, is the great-nephew of former PGA Tour Champions player Bruce Summerhays and the son of Boyd Summerhays, who played golf professionally and is now a swing coach for Tony Finau, among others. Boyd played in four U.S. Junior Amateurs, reaching the Round of 16 each time.
• For the third day out of four in the championship (all but Wednesday), play was delayed in the afternoon for more than an hour. The delay on Thursday lasted one hour, 28 minutes, from 3 p.m. to 4:28 p.m.

Quotable
“The putter wasn’t as good the second 18, but I felt like I made up for it with driving and ball-striking and chipping. Akshay is the No. 1 junior in the world. He’s such a great player. To play him and win means a lot.” – Preston Summerhays, No. 208 in WAGR, on his afternoon victory
“I’m very experienced in match play, so even though I got off to a rough start, I knew anything could happen. It was a good battle. He played well and barely missed a shot all day.” – Thomas Pagdin, who rallied from a 3-hole deficit through 13 holes against Yuki Moriyama of Japan to win in 19 holes
“I tried to qualify first and got first alternate. The funny thing is that the guy I’m playing tomorrow, Deven [Ramachandran], we were in a playoff for the [qualifying] spot. So he beat me, but tomorrow it's a rematch.” Bo Jin, whose sister is playing in next week’s U.S. Girls’ Junior in Stevens Point, Wis., on getting into the U.S. Junior Amateur as an alternate from the Fresno, Calif., sectional
“I feel like I’m firing on all cylinders right now. I rolled the putter this round better than I probably have any round I played yet. I made a couple putts that he probably didn’t think were going in.” – Austin Greaser, on his Round-of-16 victory over Kento Yamawaki
TOLEDO, Ohio – Results from Thursday’s second round of match play at the 2019 U.S. Junior Amateur Championship, played at 7,339-yard, par-71 Inverness Club.

*Quarterfinal round winners advance to the semifinal round of match play on Friday, beginning at 12:20 p.m.

Gase has a new pull to her swim training