UT and BG in the Battle of I-75 Rivalry 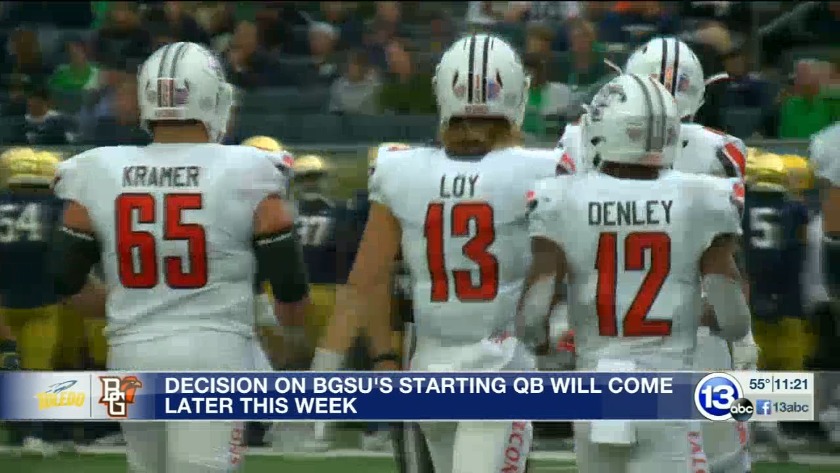 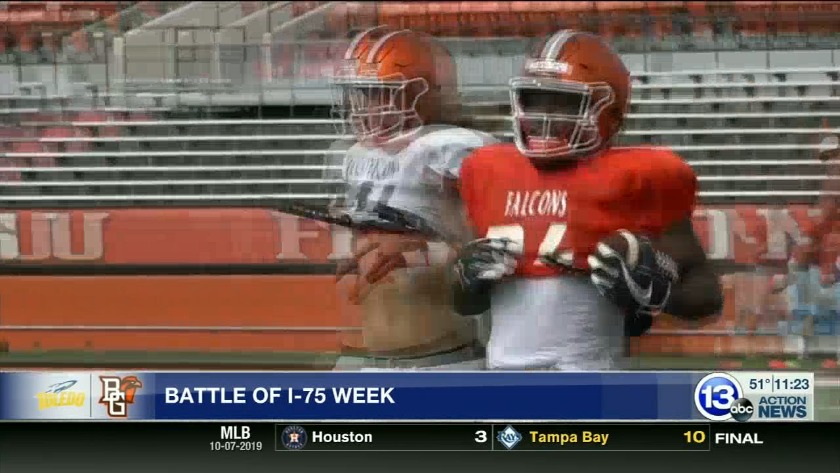 SETTING THE SCENE
• Bowling Green and Toledo are set to renew their rivalry Saturday (Oct. 12) at Doyt L. Perry Stadium. The game will kickoff at 12:00 pm and will air on CBS Sports.
• Toledo holds a narrow edge in the all-time series 40-39-4. Among Mid-American Conference schools, only Toledo and Miami hold leads in the all-time series against BGSU.
• BGSU will be celebrating 100 years of Falcon Football Saturday, recognizing many individuals who have paved the path for the first century of BGSU Football. BGSU's first game was against Toledo on Oct. 3, 1919.
• BGSU and Toledo have played every season since 1948. The two programs did not play from 1936-47, but since picking the series back up have played for 72 straight seasons (including 2019).
• Bowling Green's current second-longest annual series is against Ohio, which has been played every season since 2004.

100 YEARS OF FOOTBALL
• BGSU will be celebrating 100 years of Falcon Football Saturday, recognizing many individuals who have paved the path for the first century of BGSU Football.
• Ten individuals will be inducted into the Cast of Honor and will have their name and number hung at Doyt L. Perry Stadium.
• Bowling Green's first ever game was against Toledo on Oct. 3, 1919. The Rockets won by a narrow 6-0 score.
• BGSU's first win came in a 7-0 victory at Kent State on Nov. 6, 1920 and the Falcons have rarely looked back.
• BGSU has won 17 conference titles (12 in the Mid-American Conference) and played in 13 bowl games.
• Through 100+ seasons, Bowling Green is 543-395-52 (.575) all-time, including 284-185-11 (.604) in MAC play. The Falcons have a winning record all-time against every current MAC school except for Miami and Toledo (though BGSU has the opportunity to even the all-time series against Toledo Saturday).

SEVEN IS THE MAGIC NUMBER
• When Scot Loeffler took the field to lead Bowling Green against Morgan State, he became the seventh individual to coach a game for the Falcons since the 2013 MAC Championship game on Dec. 6, 2013. Three held interim titles in that time frame.
• Nationally, BGSU is the only program to have seven different individuals coach a game since 2013. Only Houston has seen six different people coach a game in that span of time.
• In the 2013 MAC Championship game, current Wake Forest head coach Dave Clawson concluded a five-year career with the Falcons, leading the program to a 47-27 victory over undefeated No. 14 Northern Illinois.
• Special teams coordinator Adam Scheier (now a senior special teams consultant at Mississippi State) took over on an interim basis for the 2013 Little Caesars Pizza Bowl, a 30-27 loss to Pittsburgh that served as James Conner's coming out party.
• Dino Babers was named head coach of the Falcons beginning in the 2014 season and he went 18-9 in two seasons, coaching his final game at BGSU in the 2015 MAC Championship game, a 34-14 win over Northern Illinois. He is currently the head coach at Syracuse.
• Defensive coordinator Brian Ward, now the DC at Syracuse, was named interim head coach for the 2015 GoDaddy Bowl, a 58-27 loss to Georgia Southern.
• Mike Jinks, currently the running backs coach at USC, was then hired to lead the Falcons beginning with the 2016 season.
• Jinks was fired following a 1-6 start to the 2018 season and Carl Pelini, now the associate head coach at Youngstown State, closed the campaign with a 2-3 mark.
• Enter Scot Loeffler. The former Michigan quarterback and veteran coordinator became the seventh individual to coach the Falcons in a span of 2,092 days.

Toledo and Bowling Green will meet on the gridiron for the 84th time when the Rockets invade Doyt Perry Stadium on Saturday, Oct. 12 (Noon/CBS Sports Network). The Rockets and the Falcons first played a football game on BGSU's campus in 1919, making Saturday's game the 100th anniversary of that first meeting.

Toledo (4-1, 1-0 MAC) comes into the contest with a four-game winning streak, most recently a nail-biting 31-24 triumph over Western Michigan before a Homecoming crowd of 22,141 at the Glass Bowl on Saturday. Senior quarterback Mitchell Guadagni threw for two touchdowns and ran for two more to lead the Rockets but the outcome of the victory was not settled until the game's final possession. Clinging to a 31-24 edge, the Rockets stopped the Broncos on fourth-and-22 from the UT 24-yard line when WMU quarterback Jon Wassink was tackled two yards shy of the first down by sophomore linebacker Saeed Holt with 1:44 left. Toledo was able to get a pair of first downs on runs by sophomore Bryant Koback to run out the clock and claim the victory.

Bowling Green (1-4, 0-1 MAC) is coming off a 52-0 loss at No. 9 Notre Dame last Saturday. After a season-opening win over Morgan State, the Falcons have lost consecutive games to Kansas State, Louisiana Tech, Kent State and Notre Dame. BGSU's top offensive player has been junior wide receiver Quintin Morris, who has 26 receptions for 310 yards and two touchdowns.

TOLEDO-BOWLING GREEN SERIES
This will be the 84th meeting between Toledo and Bowling Green, whose campuses are separated by a 20-mile stretch of I-75. It is also the 100-year anniversary of the first meeting between the two schools on the gridiron.
Toledo leads the all-time series, 40-39-4, thanks to a recent Toledo streak. The Rockets have won nine straight in the series, including a 52-36 victory at the Glass Bowl last year.
The "Battle of I-75" began in 1919, was halted from 1936 through 1947, then resumed as an annual affair since 1948.
The series was traditionally played in October until 2000 when it was moved to the end of the season to accommodate an ESPN broadcast. The contest stayed in that late November slot throughout the decade until 2011 when it was moved back to an October date. In 2012, the game was played on Sept. 15 in the Glass Bowl, the earliest date ever for the rivalry, and in 2013 it was played on Oct. 26 in Bowling Green. In 2014 and 2015 the game was again played in November. In 2016 and 2018, it was played in October in the Glass Bowl. In 2017, the game was played on Nov. 15 at BGSU.

BATTLE OF I-75 TROPHY
For the eighth time in the history of the Toledo-Bowling Green rivalry, the winner of the game will hoist the Battle of I-75 Trophy. The trophy was officially awarded to UT in 2011 following its 28-21 win, but the trophy was not completed in time for the game.
From 1980-2010, the trophy that traded hands between Toledo and Bowling Green was referred to as "The Peace Pipe." Beginning in 2011, the schools retired the trophy out of respect to Native American culture, and began using the Battle of I-75 Trophy, a two-piece bronze and granite sculpture that is so heavy it was created with a separate base to support it.

LAST YEAR: TOLEDO 52, BGSU 36
In his first starting assignment at quarterback, sophomore Eli Peters threw for three touchdowns and redshirt freshman running back Bryant Koback added three more on the ground as Toledo defeated Bowling Green, 52-36, in the Battle of I-75 in its Homecoming game at the Glass Bowl on Oct. 6.
It was the ninth consecutive victory for the Rockets over the Falcons but it didn't come easy. Toledo jumped out to a 17-0 lead but was only up by three points, 31-28, going into the fourth quarter. But the Rocket defense clamped down and Koback scored all three of his touchdowns in the final 15 minutes to secure the win.
While Toledo had heroes on offense and defense, it was the special teams that may have played a decisive role in the win. A blocked punt by Reggie Gilliam in the first quarter set up his own TD catch moments later, sophomore punter Bailey Flint ran for a key first down on a fake punt, and the Rockets blocked a potential game-tying field goal at the end of the first half.
Peters, filling in for the injured junior Mitchell Guadagni, completed 17-of-35 passes for 184 yards and three TDs. He did not throw an interception and was not sacked. Senior Cody Thompson was his top target, catching six passes for 78 yards and one TD. Sophomore Shakif Seymour led the running attack with 101 yards on 18 carries to complement Koback's 90 yards and three scores.